I’m sure there are many out there that may disagree but my personal feeling is that there is one particular area of maths that is massively under-practised, yet it is so important in so many other areas of maths that it can cause real difficulties for those who don’t master it before moving on.

What skill am I talking about?  Adding single digit numbers.

Of course many children can count on using their fingers or a number line but does this then serve them well enough when they come to crossing tens barriers when adding 2 digit numbers, or multiplying using repeated addition, or converting mixed numbers to improper fractions or….. I could go on but I won’t!

The strange thing is that this vital skill is under-practised both in school and at home.  In a typical year 1 classroom, the teacher will spend a few lessons exploring how numbers can be made by combining different pairs of smaller numbers, e.g.

The children will produce wonderful part-whole diagrams, bar models and many other representations using practical equipment….and then they move on.  That’s it.  They’ve covered it.  They’ve shown understanding.  So they move on.  This is not necessarily the fault of the teacher but down to a crammed curriculum which includes so much content that there is pressure to keep moving forward rather than consolidating.

The thing is, they may well have shown understanding at the point of learning, but what about 1 week later?  What about 3 months later?  Are they using this knowledge of splitting numbers in their calculations or are they reverting to simply counting up and down with the help of their fingers (I’m not completely against using fingers to help by the way).

I am still lucky enough to work with many children every week, often individually or in small groups and it seems that children fit into one of two categories:  those who have an excellent grasp of numbers up to ten and can split them into two parts to make calculations easier; and those who simply rely on counting on.  Let me illustrate this with an example:

Child A: Starts at 8 and counts forwards seven, putting a finger up each time until they have seven fingers up, ending at 15.

Although they both get to the correct answer, child B has a much better understanding of numbers and will eventually be able to apply this in other contexts.  Child A also has the potential for errors by including the number 8 in their counting and ending up at 14 instead.  They won’t notice this error as they have put up seven fingers so why should it be wrong?

Trying to explain to Child A in the above example what they could have done using words alone will only lead to a confused face – I know as I’ve tried!  What they need is to see visually what happens using concrete resources such as counters and tens frames like this:

Once they understand the concept, this is where the hard work comes in – practice!  The only way that children will begin to do this naturally without much thought is if they practise, practise and then practise some more.  This can be done using hands-on physical resources or there are many free online tools that will do the same job, for example this great Tens Frame tool from ICTgames: 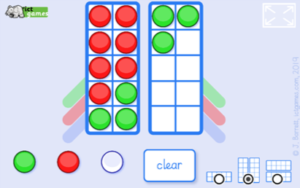 Once children become fluent at this process with practical equipment, they can go on to trying it with visual clues only.  Our Number Stacks digit cards are perfect for this as there is a visual representation of each digit on the card so it is easy to see how they need to split the smaller number to make the calculation easier:

These cards come in our Resource Kits or can be downloaded for free as part of our DIY Resource Kit: https://www.numberstacks.co.uk/diy-resource-kit/

The final step is to apply the concept without any practical or visual clues.  There are many games ideas available on our website for Number Stacks members (www.numberstacks.co.uk/games) that can help make practising the above skills more fun, including: Roll-A-Robot, Total Wipeout, Tug-Of-War and Four-In-A-Row Addition.

If we can build children’s understanding and confidence in manipulating single digit numbers, I’m sure that it will have a massive impact on their ability to grasp future calculation methods and mathematical concepts much more easily, so let’s all make a promise to give this area of early maths the time and practice it deserves!