With Numicon being such an established, concrete maths resource that many people have been using for a long time, I have been asked whether switching to Number Stacks would be confusing for a child. The simple answer is that you don’t need to switch - they can be used alongside each other to help develop a child’s number sense.

I have been a fan of Numicon ever since I was introduced to it many years ago and quickly invested in sets to be used across my previous school. The ability for children to associate numbers with physical tiles (I never did find out the correct name for the pieces if there even is one!) was brilliant in helping them link numerical digits and names to the quantities they represent. Once a child is familiar with the shapes, they no longer need to count each number which is brilliant when it comes to calculation.

It is not surprising therefore that in the early Number Stacks videos, without thinking I used the Numicon shapes when arranging the counters within tens frames. It has been pointed out to me that I have used them ‘upside-down’ as I fill the tens frames vertically from top down rather than bottom up. The reason I do this is that if a child wants to use a pictorial method (let’s say for adding two 2-digit numbers) they can draw the counters or circles from the top down on the page which means they don’t have to make a pre-judgement on how much space to leave in order to fit the number in if they drew from the bottom up! 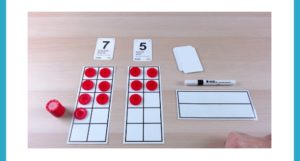 Parents of children who have been using Numicon have shared with me how this has really helped their child in recognising numbers quickly without the need to count the counters. If a child hasn’t used Numicon, they will still build recognition of the number arrangements in Number Stacks but it may just take them a bit longer.

So Numicon is brilliant at helping children develop early number sense but where Number Stacks takes over is with visually representing larger numbers and also with calculation.

Once you get beyond 2-digit numbers, Numicon becomes more difficult to represent as there is no hundred tile without bundling tens together, whereas Number Stacks has counters for hundreds and thousands. Once children have learnt the principle of exchanging 10 ones for a tens counter, or ‘swapping’ as I refer to it in the videos, they can apply the same rules to hundreds and thousands with ease.  They can also stack the counters under place-value header cards to neatly represent numbers meaning the working area isn’t littered with different tiles. 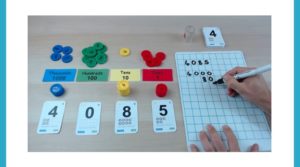 For calculation, my biggest issue with Numicon is that you can’t break down the tiles; you have to swap them for two others which is an extra step that some children find tricky. I’ll try and explain this with an example:

When adding 8 and 5, you eventually want the child to split the 5 into a 2 (to make the 8 up to 10) and a 3. With Numicon, they would have to swap the 5 tile for two others to accomplish this but with Number Stacks, they can simply break up the stack of 5. This also has the advantage of allowing the child to experiment with how they need to partition the 5 as they could try moving one counter across first before then realising they need to move a second before they have made ten.

Number Stacks is also very good for representing subtraction as you can simply build a number using the counters and then remove the amount you need to subtract, exchanging or ‘swapping’ where required. E.g. for 53 - 17, you would build 53 and then swap one of the tens counters for ten ones counters so that you could then remove 7 ones and 1 ten to get your answer. This is all demonstrated step by step in the video tutorials and builds up gradually through the Key Skills.

So going back to the question at the start of this Blog, the answer is simply both! Numicon and Number Stacks can both be used side by side to develop early Number Sense in children with skills transferable between the two resources. However, if you are yet to start on your number sense journey, we believe that Number Stacks is more adaptable as you move through the Key Skills and therefore would be the best option if you had to choose one over the other.

You can visit our website at www.numberstacks.co.uk  to explore the Number Stacks Resource Kit and to view sample video tutorials or follow us on Twitter or Facebook @NumberStacks to see some of the learning journeys that our users are sharing with us.